Today’s feature is a recent download that I’m excited about:  The Girl in Times Square (e-book), by Paullina Simons, is a riveting novel about a young woman whose search for her missing friend turns into a life-shattering odyssey. 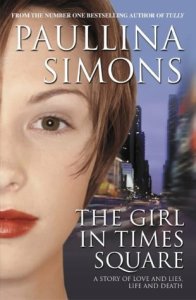 Friday 56:  Today at work, the jetlag was getting to her.  During her break, instead of eating Jell-O with whipped cream like always, she put her head down on the waitresses’ table in the booth in the back and was instantly asleep.

Synopsis:  Living in bustling New York City, Lily Quinn has plenty of distractions and is struggling to finish college as well as pay her rent. But that all pales in comparison when Amy, her best friend and roommate, disappears without a trace.

Spencer O’Malley, a cynical NYPD detective assigned to Amy’s case, immediately captures Lily’s attention. Though he is wary and wrestling with his own demons, he, too, is irresistibly drawn to Lily.

But fate has more in store for Lily than she ever expected. As she looks deeper into the mystery surrounding Amy’s disappearance, Lily finds answers she never imagined she’d find—answers that challenge everything she knows about her own life.

Lily’s search puts her on a collision course with tragedy and love, and gives her a glimpse into the abyss that swallowed her friend . . . until she faces a final confrontation with her own life-changing destiny.

I am drawn to this one, even though it has a lot more pages than I usually choose (600+).  But I think I might just lose myself in the story…after New Year’s.  Would you keep reading?

26 thoughts on “BOOKISH FRIDAY: “THE GIRL IN TIMES SQUARE””